Play quiz on Flipkart App and win free Gift Cards every day, If you are searching correct answers. Then you will get all updates answers of Flipkart Quiz. 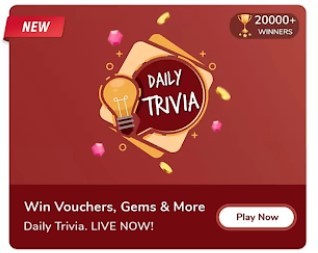 2. Open App and login on Flipkart

4. Play quiz, they will ask 5 questions.

5. Give answers of all 5 question correctly, and win Free Voucher

Q.1 Directed by Tinnu Anand, which of these is a 1981 film starring Amitabh Bachchan?
Ans. Kaalia

Q.4 Which of these is owned by the business group that owns Britania Industries?
Ans. Bombay Dyeing

Q.1 Who among these footballers is a FIFA World Cup winner?
Ans. Paul Pogba

Q.2 Who is the only sportsperson from free India to win two Individual Olympic medals?
Ans. Sushil Kumar

Q.4 First held in 1973, The Ocean Race involves the racing of
Ans. Yachts

Q.5 In baseball, two teams of how many players compete against each other?
Ans. Ten

Q.1 The balls used in which of these sports have yellow, red or blue dots?
Ans. Squash

Q.2 Who is the fastest left-arm bowler to reach 200 wickets in Test matches?
Ans. Ravindra Jadeja

Q.4 Which of these teams did NOT play in the first ever NBA match hosted by India?
Ans. Utah Jazz

Q.1 Which legendary actor was a part of the 2019 film Joker as Murray Franklin?
Ans. Robert De Niro

Q.3 Which of these characters dies in the climax of the film Sholay?
Ans. Jai

Q.2 On whose gravestone would you find 772.5 inscribed, his calculation of heat?
Ans. James Joule

Q.5 What day do we generally observe on the second Sunday of May?
Ans. Mothers’ Day

Q.1 The Indian Premier League has not witnessed a team based in which of these cities?
Ans. Cuttack

Q.2 Dabang in Hockey, Indians in Cricket and Maharathi in Wrestling are the sports teams from?
Ans. Mumbai

Q.3 Which of these is not one of the two umpires in a game of tennis?
Ans. Ball Umpire

Q.5 Which of these is not a type of gymanstics event held at the Olympics?
Ans. Aesthetic

Q.1 Who played the role of Malik Kafur in the film Padmaavat?
Ans. Jim Sarbh

Q.3 Which of these film franchises was rebooted in 2019 starring David Harbour?
Ans. Hellboy

Q.5 Which 2018 film begins with a dedication to Amrita Pritam, the Hindi poet?
Ans. Manmarziyaan

Q.1 At 3,840 metres, Mount Saramati is the highest peak of which Indian state?
Ans. Nagaland

Q.2 Which Mughal emperor built the ‘Shalimar Bagh’ in Srinagar in 1619?
Ans. Jahangir

Q.4 Who among these demons was killed by Lord Rama in Ramayana?
Ans. Dushan

Q.5 Reigning till 1912, who among these was the last Emperor of the Qing dynasty of China?
Ans. Pu Yi

To participate in the contest you must do/fulfill the following

Age must be 18 years or above

Must have a valid account on the platform and log in using the same on the Flipkart mobile App.

As part of this contest, you have to answer simple questions that will be prompted on clicking the quiz banner on the Gamezone page on the Flipkart App and ebsite during the contest period. You will need to select a response to the question prompted in the quiz. Subsequent responses from the same account ID is invalid. The user can only take the survey once and will get the reward.

There will be a quiz running every day.

Winners will be announced within 15 days from the date of participation and can check the same in their gems/rewards section.

You acknowledge and confirm that you are aware of the nature of telecommunications / internet services and that an email transmission may not be received properly and may be read or be known to any unauthorized persons. You agree to assume and bear all the risks involved in respect of such errors and misunderstanding and Flipkart shall not be responsible in any manner.